AN AUTISTIC student was locked inside a small room with the windows boarded up at his Hervey Bay primary school because his teacher said he needed “time out”.

Tate Smith, 9, was locked in the room unsupervised up to 20 times in the last year, left with just a thin mattress on the floor and a pillow.

Mother Kelly-Ann Brooks said her son, who is in Year 3 at Kawungan State School, had been left distraught by the ordeal, describing the 2x2m room as “cell-like”.

The Department of Education has now ordered the school to shut down the “unacceptable” room, putting out a warning to all state school principals about proper disciplinary action for students.

An investigation into the incident has also been launched.

“The situation is unacceptable and when it was brought to my attention yesterday I immediately ordered the school to stop using the room,” State Schools Deputy Director-General Patrea Walton told The Courier-Mail. The 2x2m room where Tate was sent. The room had a thin mattress and pillow on the floor, and was boarded up.

Ms Brooks said she knew her son was taken to the room for “chill-out time” but had not realised that the room was so small and locked while he was inside with the windows boarded up.

“I’m just devastated for the poor little thing,” she said.

“He doesn’t want to go back to school and his behaviour has really spiralled this year.

The Hervey Bay mother said her son struggled with his behaviour but locking him in a room was not the answer.

“The main thing is he’s missing out on friends, and instead he’s only getting into trouble,” she said.

“We have got it documented in behavioural reports that he has been put in there … after going over all his reports myself I have found references to it 18 times in one year.”

Ms Brooks said she would now take her son out of the state school and get him settled somewhere else. Tate Smith was locked in the tiny, boarded-up room unsupervised.

“I want him to be a normal little boy. He can do school work but he just needs that chance,” she said.

Ms Walton said the department “has moved quickly” to address the family’s concerns.

“The room is now being dismantled and the situation is being investigated,” she said.

“Additionally, I have today provided advice to all state school principals reminding them of the Department’s policy that under no circumstances must a student be placed in time out without strict supervision.”

Ms Brooks said she was now worried her son’s experiences in the room had meant he had regressed in his learning.

“He has just been lashing out at everybody around him to the point where he’s trying to get himself sent home so he doesn’t have to go into the room,” she said.

“Now this has come out, no wonder he’s trying to get himself suspended.”

She said her son had told her he hated being in the room.

“No child should ever be locked behind a door like that,” she said.

Ms Brooks said she had raised her concerns with the school but was yet to have a face-to-face meeting.

It comes after it was revealed a 10-year-old special needs student in a Canberra school was kept in a 2m-square, purpose-built cage intended as a “sanctuary”.

“This just reflects to me again that we have got a system in crisis where students with disability are now facing significant harm,” she said.

“We are not addressing the systemic problems which exist in providing a quality education for students with a disability.”

Ms Gotlib said the discipline of the nine-year-old student was arguably a crime.

“It’s really important that this child is not positioned as a burden to any school, he’s not,” she said.

“He’s a young man with specific needs that given the appropriate circumstances would greatly enrich a school community.”

October 28, 2015: There are reports that an autistic student was locked inside a small room with the windows boarded up at a primary school in Queensland.

A nine-year-old boy with autism has been repeatedly locked inside a small room with a mattress and pillow at his Queensland primary school, because his teacher said he needed a “time out”.

Tate Smith was detained in the room with boarded-up windows up to 20 times in the past year at Kawungan State School, near Fraser Island, with his mother Kelly-Ann Brooks describing the room as a “cell”.

“He doesn’t want to go back to school and his behaviour has really spiralled this year,” Ms Brooks told The Courier Mail.

The news has been met with outrage, with the CEO of Autism Awareness Australia, Nicole Rogerson, saying the actions reflected a lack of understanding and training in teachers who have students with autism in their care.

“There’s a way to manage children with autism, and there’s a way not (to), and clearly people just don’t get it.”

Ms Rogerson said in Tate’s case, the situation had gotten out of control.

“It’s absolutely not acceptable to detain children, period,” she said.

Patra Walton, the Deputy Director-General of State Schools in Queensland, yesterday said the matter was now under investigation.

“The situation is unacceptable and when it was brought to my attention yesterday I immediately ordered the school to stop using the room,” she said in a statement.

“The room is now being dismantled and the matter is being investigated.”

For the second time in six months, a school is under investigation for locking an autistic student inside an enclosed space.

The Department of Education has slammed the Kawungan State School, near Fraser Island Queensland, for locking an autistic student inside a small room with the windows boarded up, and there are now calls for the teacher responsible to be fired.

Following the incident, the department has ordered the school to shut down the “unacceptable” room and has sent out a warning to all state school principals about proper disciplinary action for students.

It is understood the boy was detained in the room with boarded-up windows up to 20 times in the past year at the school.

The room chosen was 2x2 in size, had no sunlight and was furnished by only a thin mattress on the floor.
The boy’s mother described the room as “cell-like”, and said her son does not want to return to the school.

The teacher defended his decision, saying the boy needed “time out”.

However, Stephanie Gotlib, Children with Disability Australia (CDA) executive officer, told The Educator this was far from standard practice.

“This wasn’t a case of time out. Time out involves giving the child some space and calming them down. This is seclusion,” Gotlib said, adding that if she did the same in her household ‘child services would be knocking on her door’.

“Time out is not locking a child in a cage or a 2x2 room with boarded up windows.”

It is the second time in six months that a school has come under fire over such an incident.

Last month a school principal was sacked following an inquiry into the shocking treatment of a 10-year old autistic student in Canberra.

State Schools Deputy Director-General, Patrea Walton, told The Educator that the latest incident was “unacceptable” and that appropriate action had now been taken.

“Teaching is a highly skilled profession and our workforce is committed to providing a world class education to all students, including those with disabilities.

“Addressing challenging behaviour is one of many demanding aspects teachers deal with every day.”

Walton added that schools must “find a balance” between supporting the individual student and ensuring their welfare and that of other students, who have a right to learn in a safe environment.

In the 2015-16, the QLD Government allocated more than $929m for services to support students with disabilities in state schools.

“As part of this commitment, the Government recently announced through the Advancing Education action plan, the establishment of a dedicated Autism Hub to provide world class practices to support students with autism,” Walton said.

“The Autism Hub will be operational from the start of the 2016 school year.”

Gotlib said that the reported cases are just two of potentially many others in a system that fails to give adequate support for children with a disability.

“We’re getting more frequent reports of restraint and seclusion of children with a disability, and this says a great deal about the education system’s inadequate support, funding and expertise,” Gotlib said.

“This is a reflection of a system in crisis which is not providing a quality education experience for these children.”

Gotlib added that even if additional funding was provided, there was no cohesive strategy as to how to use it.

“Yes, we need more resourcing but we need a more clearly articulated reform plan, but at the moment that’s not on the table anywhere,” Gotlib said, adding a “critical examination of attitudes” was needed to understand why these incidents occurred. 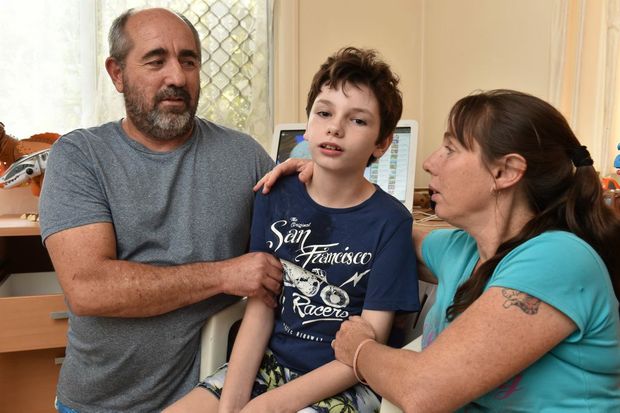 Firstly, there was hardly enough information to make a proper decision as to whether it was a case of negligence, on the part of the special school staff or not.

It does not say if it happened more than once or if Daniel has other siblings - neither of which really impacts on this story, but may hint at extra scrutiny at home and in other environments.

As a former nurse and teacher aide, and the mother of children with disabilities, hearing impairment and Autism Spectrum Disorder with epilepsy, I myself have adopted and seen employed practices such as these in other schools and hospitals over the years.

A seat belt is the safest, gentlest and least undignified measure for one who may wander or be privy to harm in a school setting that caters for others in a classroom, staff and peers alike.

Over the course of two decades, I have seen huge improvements at special school settings, that may still need to employ safety measures such as these, that comply with school policy and procedures.

No longer are bandages used to tie limbs to bedposts in hospitals for example. The days when funding for adequate teacher assistant/student ratio happens, is the day these restraints may eventually fade out.

After all, in the picture in the Fraser Coast Chronicle, the parents' own hands are used, gently, to restrain Daniel.

There aren't enough hands to go round for this to happen all the time in a special school classroom, albeit 4-6 students per class.

Their hands, their eyes, their ears are constantly assisting our children to facilitate their care and learning.

Hervey Bay Special School is a tremendous school and the staff give 110%.

Enough for me to recommend them to the Education Department for their wonderful advocacy for our children who need above-average care and a more-than-decent education.