Women with autism are twice as likely to be undiagnosed as men. Amelia Hill speaks to four mothers who only recognised their own condition after researching their children’s behaviour

Experts say that there is a hidden pool of mothers who have grown up with undiagnosed autism. These women often only recognise their own condition when researching their children’s symptoms.

About a fifth of people with autism are thought to have been diagnosed as adults, although no national figures for adult diagnosis are available. Women with autism are most likely to remain undiagnosed: a survey by the National Autistic Societyfound that twice as many women were undiagnosed compared with men (10% against 5%).

Even once diagnosed, mothers with autism often hide their condition from the outside world, terrified their children will be removed from them if social workers misinterpret their autistic traits as indicating potential harm to the child.

“Their own autism, often undiagnosed, means they put professionals’ backs up and can be accused of causing or fabricating their children’s condition,” said Dr Judith Gould, the lead consultant and former director of the Lorna Wing Centre for Autism who developed the first and only female-specific diagnostic tests, and who trains doctors in how to recognise late-adult female diagnosis.

Married with four children aged 19 to 26 – two of whom are neurodiverse and two neurotypical – Laura James has written Odd Girl Out, the first memoir by a British woman with autism to be published by a mainstream UK publisher. She was diagnosed last year.

“I mothered my children in a very different way to a neurotypical mother. For a start, I never told them off about anything. It just doesn’t seem logical to me. If they’re doing something you don’t like, it’s because you have a preconceived idea of how children should be, behave or look. That’s illogical. If, on the other hand, they are doing something dangerous, then it’s much more effective to sit down and discuss it with them.

If they’re in trouble, I’ll do everything practical I can to help them. It would be illogical to punish them

James tells how one of her children was always a straight-A student, while another of them was not academically inclined while in school.

“I’m equally proud of them both because I want my children to be content, happy and in a place of safety. To me, academic success isn’t a logical step towards that goal. I love my children desperately and would do anything for them, but I do think I don’t understand that fieriness that comes about when people talk about parenting. I simply don’t feel that sense of passion that neurotypical parents seem to feel.

“It could be because of this lack of passion that I have a different relationship with my children than most parents do: they like to hang out with me and message me just as much as they do their friends, and there’s nothing they would not tell me because they know I would never, ever get angry with them. If they’re in trouble, I’ll do everything practical I can to help them, which means it would be illogical to get angry, upset or punish them.”

Nicola, 39, was diagnosed at 34 after stumbling across information on autism and women when researching her son’s symptoms. Her son, Andrew, was diagnosed at two and Nicola received her diagnosis six months later. It took four years, however, to get last year’s diagnosis for her daughter, Marion, now eight (the names of her children have been changed).

“My children are happy and doing well at school. What other measure can there be that I’m a good mother? But because of my autism, I live in fear. Society thinks that autistic mothers are, first and foremost, a safeguarding issue. I’m terrified that social services will take them away from me.

My son loves his squeezes and hugs, and I give them to him even though I find it almost intolerable to do so

“I’m not worried about whether I’m a good mother or not. I know I am. I also know that my autism helps me be a good mother: autistic people get obsessions, and my obsession is making sure I’m doing everything I can to give my children everything they need, to love them, fight for them, and get them to adulthood healthy and happy.

“When my husband and I decided to start trying for children, I knew that I didn’t have any idea how to be a mother: my own childhood had been very unhappy. So I did loads of research. That’s how I discovered that children need cuddles and affection, and even though I don’t do touching – my idea of heaven is to live in a parallel non-touching world to everyone else – I make sure my kids get all the physical affection they need. My son loves his squeezes and hugs, and I give them to him even though I find it almost intolerable.

“Being autistic has meant my autistic children have grown up without the usual pressures and stresses that neurotypical parents can unknowingly subject their children to. My parents tried to force me to be ‘normal’ and to conform. They tried to force me to socialise, eat normally, behave normally. It was terrible: I grew up in fear and trauma.

“Before I knew that my children or I were autistic, it was natural to me to give them an autistic-friendly upbringing when they showed signs that was what they wanted. I didn’t think there was anything strange in it at all. And thank God I did: it means my children have never been stressed at home because of their autism.

“I’m not sure I would have been such a good mother to non-autistic children. I find it completely normal that my daughter plays by arranging her rubbers and then looking up more rubbers on the computer. It’s how I play, and I can do that with her for hours. But when my stepson wants to do imaginary play with his dinosaurs, I’m completely at sea.” 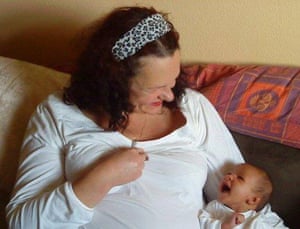 ‘My autism was ultimately a good thing’ … Melanie Mahjenta with Rosie as a baby.

Melanie Mahjenta was accused of a rare form of child abuse – fabricated or induced illness (FII) – by paediatricians and social services in 2015 during her fight to get her three-year-old daughter, Rosie, diagnosed with autism.

“Rosie was incorrectly diagnosed as not being autistic in 2013, despite the results from a clinical assessment which found she was on the spectrum,” says Melanie. “I believe the team rejected the assessment results because they had a basic lack of understanding about the different manifestations of autism, particularly in females. They refused me a second opinion, which is unlawful, and accused me of fabricating Rosie’s symptoms.

Part of being autistic is being unable to cope with injustice

“The team also failed to recognise that I was on the autistic spectrum, although I told them that I believed I was. They should have been able to recognise my behaviour – which I understand can be challenging – as typical of an autistic parent. Instead, in 2014, they held a safeguarding meeting to discuss whether I was exaggerating Rosie’s symptoms. This single area of concern led directly to a referral to children’s services and to Rosie being made a child in need, a decision that was taken without any formal review.

“When Rosie was made a child in need, my friends and family told me to stop fighting for her diagnosis. But I couldn’t stop: part of being autistic is being unable to cope with injustice.

“I understand that my autism makes me a difficult person to deal with: I don’t know when to back off when I know I’m right. Maybe I can’t always look people in the eye, so perhaps I come over as being shifty. Autistic people do hyper-focus, but they mistook my obsession as a sign I was unstable.

“But although those traits are hard for people to deal with, my autism was ultimately a good thing. Perhaps a neurotypical person would have thought the doctor knew best and backed off. Or they would have stopped fighting because they feared losing their child. But I fought on and because of that, not only has Rosie finally been diagnosed with autism, opening the doors for more support, but the ombudsman found in my favour on all my points, and even awarded us damages.” 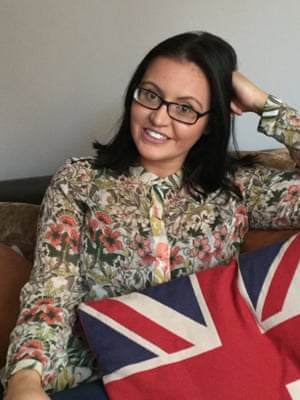 Carly Jones, 35, is a divorced parent of three daughters: Chloe, 18, Honey, 14, and Cherish, nine. “Chloe is neurotypical. Honey was diagnosed in 2008 at six with Asperger’s, and Cherish was diagnosed two years later with autism, at two years old. I was diagnosed four years after Cherish. It was 2014 and I was 32.

“Not knowing what was ‘wrong’ with me until I was 32 was catastrophic for my life in many ways. Not knowing I was autistic meant I didn’t cope at school and left with no GCSEs. I got pregnant at 15, suffered abuse, got into controlling relationships, and mistook users and bad people for real friends.

“But part of me is glad that I didn’t know I was autistic until I had already had children. I don’t know that I would have been brave enough to have had them, had I known I was autistic. I might well have been too cautious to think I could be a good mother.

“There is so much judgment against autistic mothers that I consider myself genuinely lucky never to have been subjected to the interrogation of the social service professionals. It’s a constant cause of terror for autistic mothers. I only admit that I’m autistic to better support my daughters and jump those hurdles on their behalf. I’ve done it because what happens when my daughters grow up if they decide to become parents? What hurdles and preventions and heartbreak will they face if autistic mothers do not stand up today and tell people how we can be an utter success for our families?

“The level of care an autistic girl needs to be able to socialise is vast. Because I’m autistic, I understand and will spend the necessary hours helping them, before they go out socially, to work out everything that could possibly happen when they’re out and how they could react. We then work out a contingency plan for if something happens that we have not predicted. A neurotypical mother might not understand this, with the result that their children go out unprepared, or don’t go out at all.

“Because I’ve been the subject of it myself, I also know how common it is for autistic people to be horribly abused. I’ve had to find a way of helping my daughters to be mindful of their vulnerability without them seeing it as a deficit or negative, or becoming cynical. I also know, from my own experience, that autistic people often don’t tell you about the abuse they’ve suffered, because they assume everyone knows what they do. I’ve had to always remember to press my daughters to tell me everything about their days that could be important in keeping them safe and happy.”