ONE of Allora's most inventive young students has been awarded with a trip to NASA and the title of National Winner in Origin's littleBIGidea competition.

Jasmine Eldridge, 12, from Allora State School was named the national winner in the Year 7 - 8 category from more than 1000 entries received.

Jasmine's littleBIGidea entry, Dog of Technology (D.O.T), is designed as an aid to assist children like herself with autism.

D.O.T is a robot dog which helps remind kids to take medication and has a button to notify family via email or text if they are needed in an emergency.

D.O.T also has a removable collar that can be used as a GPS wrist band and features LED lights programmed to flash in sequences to assist the child in calming down. D.O.T is user friendly, portable and includes breathing and calming strategies and interactive games.

Jasmine said she came up with the idea a few years ago in a bid to create something to help children like her. 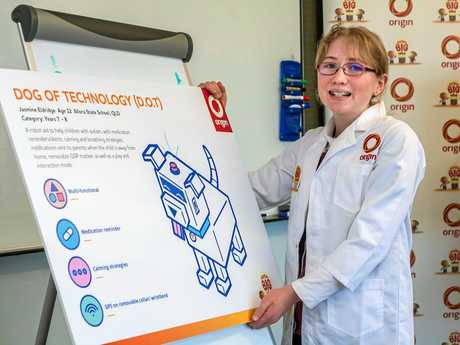 Young Allora student Jasmine Eldridge has been rewarded for her Dog of Technology invention as part of Orgin's annual littleBIG idea competition.Contributed

"Well, one day I was in year three or four and I really wanted a Zoomer Dog (a robotic dog toy)," she said.

"I thought I could make something just as well myself.

"When someone has autism it normally means they have a special interest.

"I have had many - horses and My Little Pony - but something turned my brain to looking at robots."

Jasmine's award winning idea was judged the most original, creative and practical by a judging panel consisting of Jordan Nguyen who is a biomedical engineer, humanitarian, technology futurist, inventor and littleBIGidea ambassador Alison Stoakley.

Prior to being announced as a national winner Jasmine participated in an Engineers Without Borders design workshop along with other finalists in the competition.

"Jasmine has done an exceptional job of creating and prototyping her invention to help young people like her with autism," Dr Nguyen said.

"The idea is one that could have a positive impact for many people, is accessible and could be commercialised. Awesome work that she has coded the prototype herself and that it is programmed to serve multiple functions in different scenarios. I am looking forward to seeing the next steps in this invention."

Thousands of ideas have been submitted to Origin's littleBIGidea since it first launched in 2013.

Some previous winners have gone on to commercialise their ideas, while others have used the opportunities presented by the competition to further their study and career ambitions.