Multiple studies have found links between vitamin D and autism, but nothing is conclusive yet. Unsplash

In the last few decades scientists have been discovering the many uses of vitamin D and the possible effects of not getting enough of it. An animal study published today has found a possible link between the amount of the vitamin in the mother’s diet and her offspring’s behaviour.

Little was known about the role of vitamin D in humans until the 1990s, when it was discovered most tissues and cells in the body had a receptor specifically designed to attach to molecules of vitamin D. Our knowledge of evolution – and that most aspects of our body have evolved for a very good reason – twigged scientists to the possibility vitamin D may be important to bodily function.

Since this time, considerable research has found an important role for vitamin D in the development of bones, the brain and a number of other organs. A 2014 report found a lack of vitamin D has been linked to 137 different conditions.

What did the study find?

Female rats were fed one of two diets just prior to becoming pregnant. The first diet contained adequate amounts of vitamin D (a vitamin D “replete” diet). The second diet contained minimal amounts (a vitamin D “deficient” diet). We then studied the offspring that resulted from these pregnancies.

In both humans and rats, a baby developing in the womb is completely reliant on the mother’s vitamin D stores. This means a mother’s level of exposure to vitamin D during pregnancy is highly correlated with the levels of vitamin D in the baby.

What does this mean?

The data collected during the study indicated vitamin D deficiencies during pregnancy may lead to differences in the brain and behavioural development of offspring.

Of critical importance is the acknowledgement it is a long way up the evolutionary tree from rat to human. What research demonstrates is true for rats may not be for humans.

Nevertheless, this study sits in a broader context of a large body of research linking maternal vitamin D during pregnancy and child development. Many of the previous studies have examined mice or rats. Therefore, these are subject to the same caveats as this most recent study. 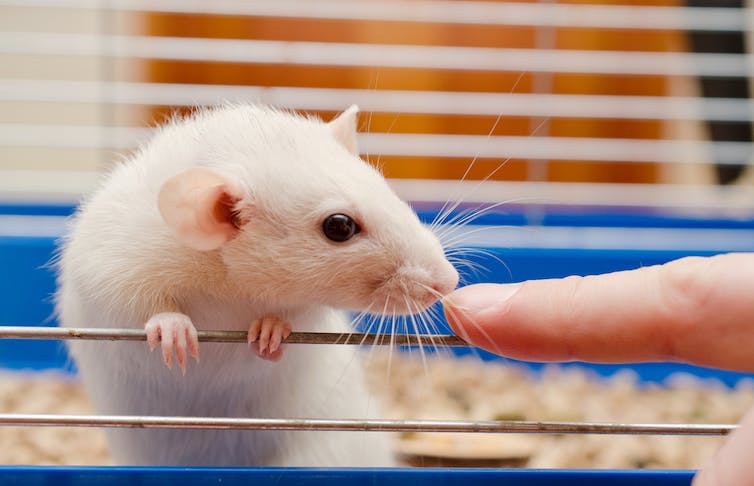 Animal studies can tell us a lot, but the results won’t necessarily apply to humans. from www.shutterstock.com

A growing number of human studies have also been conducted, particularly in the area of autism. Autism is a neurodevelopmental condition in which children develop differently and show difficulties with social and communication skills as well as repetitive behaviours.

Numerous human studies have provided an inkling of a link between vitamin D deficiency during pregnancy and the chance of having a child with autism. While the increase in chance is very small, the finding has been replicated in a different country.

Another key study found lower levels of vitamin D in the blood of newborn babies who later developed autism compared to siblings who did not develop autism.

No study that examines the behaviour of rats could ever claim to provide an accurate investigation of the study of human behaviours. What this study adds is another piece of evidence that vitamin D levels may be important to the development of brain and behaviour in mammals.

The findings of the study don’t mean expectant mothers should rush out to buy vitamin D supplements. There have been studies highlighting the health risks posed by “over-supplementation” of vitamins. Concerns have also been raised about the marketing machines that push the “health effects” of vitamin supplements with very little evidence to corroborate the claims.

There is currently not enough evidence to recommend vitamin D supplementation for all pregnant women. Large-scale randomised controlled trials that comprehensively examine the safety of supplementation for humans, as well as the effect of this supplementation on the mother and the developing child, are critical to moving to this next step.

The best current guidance is to ignore the noise and the hype, and follow the clinical advice provided by the attending obstetrician, GP or midwife.

Read more: Do more children have autism now than before?

There is no one single cause of autism. Various genetic factors are likely to be the ultimate cause of most cases of autism. These may work by themselves, or in combination with environmental factors, to lead a child’s brain to develop differently and result in the behaviours we diagnose as “autism”.

The more important question is how we can better help children and adults on the autism spectrum to reach their full potential. While this particular piece of research focuses on the earliest part of life, it’s critical to remember autism affects all ages. By focusing on the human behind the diagnosis, and how we can adapt to the unique strengths of each individual, our community will be enriched beyond measure.