Simon Baron-Cohen absorbs the grave revelations in a study on a paediatrician enmeshed in autism’s history.

The Austrian paediatrician Hans Asperger has long been recognized as a pioneer in the study of autism. He was even seen as a hero, saving children with the condition from the Nazi killing programme by emphasizing their intelligence. However, it is now indisputable that Asperger collaborated in the murder of children with disabilities under the Third Reich.

Historian Herwig Czech fully documented this in the April 2018 issue of Molecular Autism (a journal I co-edit; see H. Czech Mol. Autism 9, 29; 2018). Now, historian Edith Sheffer’s remarkable book Asperger’s Children builds on Czech’s study with her own original scholarship. She makes a compelling case that the foundational ideas of autism emerged in a society that strove for the opposite of neurodiversity.

These findings cast a shadow on the history of autism, already a long struggle towards accurate diagnosis, societal acceptance and support. The revelations are also causing debate among autistic people, their families, researchers and clinicians over whether the diagnostic label of Asperger’s syndrome should be abandoned.

In 1981, psychiatrist Lorna Wing published the paper in Psychological Medicine that first brought Asperger’s clinical observations to the attention of the English-speaking medical world, and coined the term Asperger’s syndrome (L. Wing Psychol. Med. 11, 115–129; 1981). A decade later, in the book Autism and Asperger Syndrome (1991), developmental psychologist Uta Frith translated into English the 1944 treatise by Asperger in which he claimed to have discovered autism.

Finally, in 1994, the American Psychiatric Association (APA) recognized the diagnosis of Asperger’s syndrome in the fourth edition of its Diagnostic and Statistical Manual (DSM). The syndrome is characterized by strengths such as unusually deep, narrow interests, and challenges in social communication and interaction, in people with average IQ or above and no history of language delay. (In the 2013 revision of the DSM, the APA deleted Asperger’s syndrome in favour of a single category, autism spectrum disorder.) 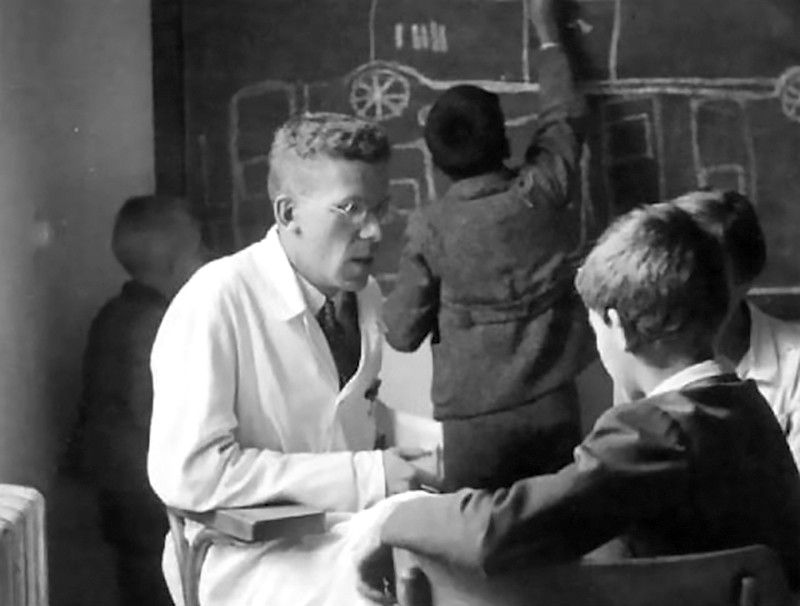 Hans Asperger with children at the University Pediatric Clinic in Vienna, around 1940.Credit: Pictorial Press Ltd./Alamy

In digging anew into the deeper historical context of Asperger’s work, Sheffer fills in parts of the story anticipated in John Donvan and Caren Zucker’s history of autism, In a Different Key (2016; see B. Kiser Nature 530, 159; 2016), which referred to Czech’s early findings. Sheffer reveals how the Nazi aim of engineering a society they deemed ‘pure’, by killing people they saw as unworthy of life, led directly to the Holocaust.

With insight and careful historical research, Sheffer uncovers how, under Hitler’s regime, psychiatry — previously based on compassion and empathy — became part of an effort to classify the population of Germany, Austria and beyond as ‘genetically’ fit or unfit. In the context of the ‘euthanasia’ killing programmes, psychiatrists and other physicians had to determine who would live and who would be murdered. It is in this context that diagnostic labels such as ‘autistic psychopathy’ (coined by Asperger) were created.

Sheffer lays out the evidence, from sources such as medical records and referral letters, showing that Asperger was complicit in this Nazi killing machine. He protected children he deemed intelligent. But he also referred several children to Vienna’s Am Spiegelgrund clinic, which he undoubtedly knew was a centre of ‘child euthanasia’, part of what was later called Aktion T4.

This was where the children whom Nazi practitioners labelled ‘genetically inferior’ were murdered, because they were seen as incapable of social conformity, or had physical or psychological conditions judged undesirable. Some were starved, others given lethal injections. Their deaths were recorded as due to factors such as pneumonia.

Sheffer argues that Asperger supported the Nazi goal of eliminating children who could not fit in with the Volk: the fascist ideal of a homogeneous Aryan people.

Both Czech and Sheffer include details on two unrelated children, Herta Schreiber and Elisabeth Schreiber, and their referral letters, signed by Asperger. In these, the paediatrician justifies Herta’s referral to Am Spiegelgrund because she “must be an unbearable burden to the mother”; and Elisabeth’s, because “in the family, the child is without a doubt a hardly bearable burden”. These provide proof that he effectively signed their death warrants.

Nearly 800 children were killed in Am Spiegelgrund. Asperger went on to enjoy a long academic career, dying in 1980.

Both Asperger’s Children and Czech’s paper converge on the same conclusion. Personally, I no longer feel comfortable with naming the diagnosis after Hans Asperger. In any case, this is a category rendered moot in the most recent edition of the DSM (used in the United States). European nations will follow this diagnostic lead in 2019, with the 11th edition of the International Classification of Diseases.

The future use of the term, of course, is a discussion that must incorporate the views of autistic people. Many take pride in the term Asperger’s syndrome as part of their identity, feeling it refers to their personality and cognitive style, which obviously do not change simply because of historical revelations. They might not, therefore, want a change. Others have already written about switching to using ‘autism’ (or autism spectrum disorder, or autism spectrum condition) to describe their diagnosis.

For brevity and neutrality, I favour the single term autism. However, because of the considerable heterogeneity among autistic people, I think it could be helpful for them and their families — together with autism researchers, clinicians and relevant professionals — to discuss whether subtypes should be introduced.

When Wing coined the term Asperger’s syndrome, none of us was aware of Hans Asperger’s active support of the Nazi programme. As a result of the historical research by Sheffer and Czech, we now need to revise our views, and probably also our language. Asperger’s Children should be read by any student of psychology, psychiatry or medicine, so that we learn from history and do not repeat its terrifying mistakes. The revelations in this book are a chilling reminder that the highest priority in both clinical research and practice must be compassion.