I'm autistic, and I've rarely ever seen myself in the television characters that are supposed to represent me. There seem to be a lot of doctors, detectives – and dudes. It's hard to find stories about openly autistic girls and women navigating life as openly autistic girls and women; and even harder to find ones where autism is treated as more than a freakish gift, or as a disability.

Which is why Netflix Original series Atypical is so important, and paradigm shifting. Producer and writer Robia Rashid (How I Met Your Mother, Bad Teacher) has created a world where the autistic are no longer shoved into the role of freaky savant, or burdensome family member being shuffled onto a bus headed back to the asylum. In Atypical, autism provides clarity in a world filled with chaos.

Its central character, Sam (Keir Gilchrist), is an autistic, Antarctica-loving, therapy-obsessed teenage boy and, through his perspective, the toll of spoken and unspoken social expectations become illuminated. Sam struggles to understand how some things are appropriate in one context yet, for seemingly no logical reason, the same things are considered inappropriate in another. He sees things that others take for granted, and questions what no one else seems to notice. So the more Sam learns to embrace his autistic nature, the more helpful he becomes to those around him.

In the third episode of season two, Sam attends his first group therapy session and is encouraged to "self-identify" and ask for what he needs this week – just once. Sam is nothing if not a quick study, and he accomplishes this task confidently and with ease. Unlike the neurotypical people in his life, Sam has no shame around recognising his needs and asking that they be met. He sees the logic, follows the steps, and expresses himself – even when everyone else appears to be incapable of doing the same. 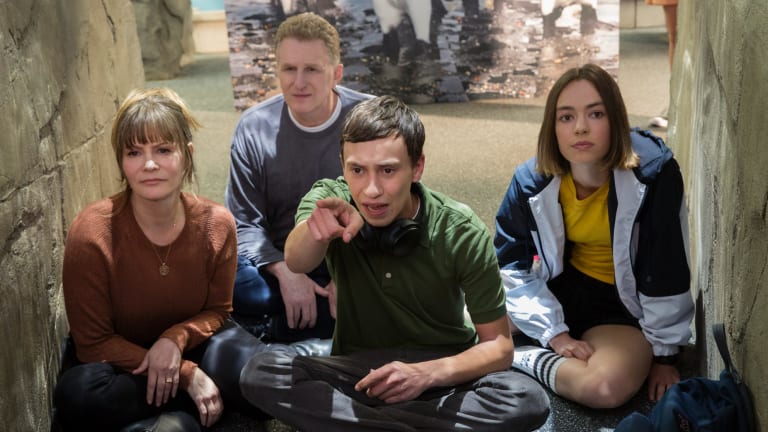 Openly autistic characters, such as those in Atypical, have been largely absent from popular culture until now.

Sam's family members and friends flail around each other, completely unable to take responsibility for their thoughts, feelings and preferences. They have no language to articulate themselves beyond resorting to lies, blame and judgment. Which is ironic, given that autism is technically defined by "severe deficits in social interaction and communication" and "restricted and repetitive behaviour".

We have a lot more to thank Sam's group therapy sessions for. Through them, the show is now introducing some autistic girls into the mix. I'm excited to see how things progress with Lily (Nikki Gutman), who's in the midst of a somewhat traumatising change of dentist. "Maybe I'll just let all my teeth fall out?" she shrugs. And defibrillator-obsessed Amber (Layla Weiner), who dreams of saving lives as a paramedic.

These openly autistic female characters may remain in the background of Sam's experiences. However, it's revolutionary that they're a part of them at all. Prior to their appearance, we've only had a handful of openly autistic characters on our screens. There's Julia from Sesame Street, who's great, even though she's a Muppet, and Temperance Brennan of Bones, and Saga of The Bridge, both of whom are rumoured-to-be-autistic characters. They aren't out-and-proud and, due to this ambiguity, it's difficult to celebrate autism through them, or to go into it all, really.

Openly autistic characters such as Lily, Amber and Sam have been largely absent from popular culture until now. They are hugely valuable because they offer a more dynamic portrayal of autistic people. We're no longer being treated as one-trick circus acts, or as the focus of pity parties.

The way we see, feel and think about life is being celebrated. Our emotional, spiritual, sexual and psychological landscapes are being recognised as unique. Our ability to expose the shortcomings of the social structures that surround us, and the limited ways in which people communicate with one another, is being harnessed in storytelling.

We're in the best position to see society clearly, because we don't fit into it.

So writing shows about those of us on the spectrum isn't some sort of public service to the people that have a vested interest in autism, or a "nice" thing to do for autistic children and adults, like me, who yearn to see ourselves. Portraying autism is a service to everyone, because it helps everyone to see themselves.

Atypical (season two) is on Netflix.