A Canberra teenager with one failing kidney is facing a death sentence without dialysis and an eventual transplant but according to his mother, doctors at Canberra Hospital have told him he can’t be treated because of his autism.

Palmerston mother and full-time carer Leanne Browning says she was told on Christmas Eve that her 17-year-old son Caleb, who also has ADHD, only had a few months to live but did not fit the criteria for dialysis because he could not sit still enough and sedation would further damage his kidney.

And without dialysis, he cannot be put on the transplant list.

Ms Browning says Caleb, who attends The Woden School, was born with only one part-functioning kidney but it was damaged by exploratory surgery in 2015 at Canberra Hospital, and last year it began to deteriorate rapidly.

Her decision to agree to the kidney surgery has haunted Ms Browning ever since but she says at the time the hospital gave her no choice.

It is the latest episode in what has been a fractious relationship with Canberra Hospital, where Caleb was born six weeks premature with a range of medical issues, including a dysplastic kidney, a kidney with only a third function, and immature lungs.

He spent the first 16 months of his life in hospital, in Canberra and Sydney, and finally returned home with a long-term feeding tube because he had also suffered reflux and could not swallow.

Although Caleb’s kidney was supposed to have been monitored over the years, mother and son lost touch with Canberra Hospital until 2015 when he needed a replacement feeding tube.

By this time, Caleb had learnt to eat in small portions and when the replacement tube failed to work properly, causing food and corrosive stomach acid to leak, Ms Browning demanded the hospital remove the tube, convinced that he would be able to cope without it.

She says the hospital finally agreed but only if doctors could now examine the kidney, which came to their attention in the case notes.

“I was really angry and I was saying to them, for 12 years you did nothing about this kidney. I’ve come in over his tube burning him and now you’re telling me unless I let you interfere with it basically you won’t take his tube out,” Ms Browning said.

The surgery did not go well, and it took another two operations before Caleb could leave hospital after three months.

“Caleb came out of it and was screaming and screaming over the pain in his back. He couldn’t urinate, and they realised that something had gone wrong and they had to go back in,” Ms Browning said.

She said the ureteroscope (fiberoptic viewing tube) had damaged the kidney and it now required a stent, but a fungal infection around the stent meant more surgery to replace it.

With the feeding tube gone, Caleb was eating normally and gained weight but Ms Browning had been told there would be slow deterioration in the kidney.

By the second half of 2018, this deterioration was accelerating and Caleb began to lose his appetite and weight, and become fatigued and lethargic.

Ms Browning was told his treatment options were limited, culminating in the Christmas Eve appointment, which left her stunned.

For Caleb, the situation is hard to comprehend but he is aware of it. His mother says he has told her, “I don’t want to die.” 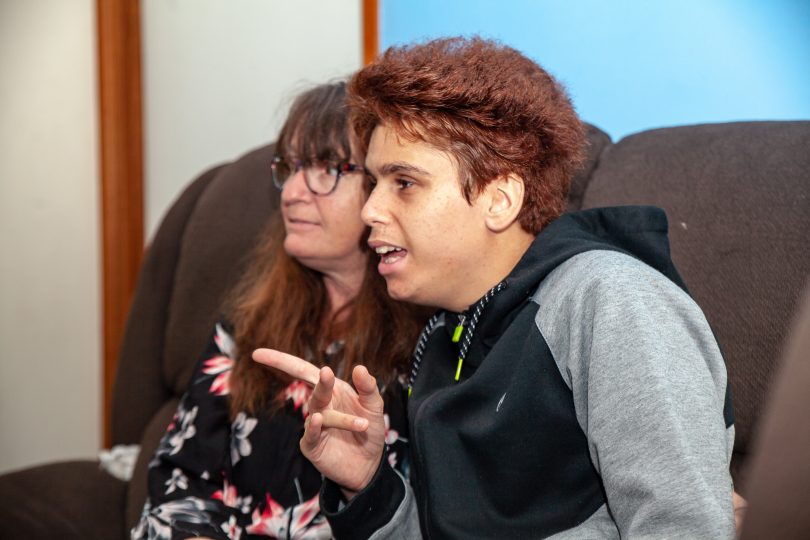 Caleb is aware of his situation.

Ms Browning wishes she had never agreed to the exploratory surgery, which the original specialist in Sydney had advised against.

“They should never have touched it (the kidney), they were told by the specialist in Sydney not to touch it. They blackmailed me by saying they wouldn’t remove the tube unless I agreed to let them fiddle with his kidney,” she said.

“I’m just so angry that I signed the paperwork to start with. I forced my way into the hospital to try to get my son’s tube fixed, and now look at the state he’s in.”

Caleb has more appointments with renal specialists in Canberra and at Westmead Hospital in Sydney but without dialysis and a transplant, the future looks grim.

Canberra Health Services said in a statement that it was unable to comment on the individual treatment of its patients as to do so would breach patient confidentiality.

“We understand that dealing with the illness of a close relative can be incredibly difficult and traumatic,” it said. “All clinical decisions made by staff at Canberra Health Services are done so in the best interests of the patient.”