He had undergone extensive treatment for acute myeloid leukemia, a cancer of the blood cells, over the past 10 months.

Most of his treatment had taken place at the Peter MacCallum Cancer Centre in Melbourne.

"After successfully battling three cancers since 2009, the fourth cancer, acute myeloid leukaemia eventually claimed his life although he continued to contribute to his many passions and attend functions right until the day of his final hospitalisation," his family said in a statement. 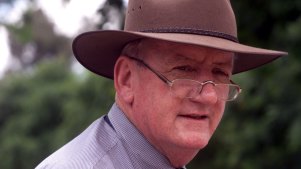 Tim Fischer, a singular man in a big hat, dies at 73

Mr Fischer, who served and was wounded as a platoon commander in Vietnam during the late 1960s, believed his cancer was related to being sprayed by the defoliant Agent Orange during that war.

Mr Fischer was deputy prime minister in John Howard's Coalition government from 1996 to 1999.

Prime Minister Scott Morrison said Australia had "lost an original" and extended the offer of a state funeral "to celebrate his life and extraordinary contribution".

"As a result, Tim Fischer will forever cast a big shadow on our nation.

"He walked his own path with honesty and humility and that is what Australians loved about him."

Mr Fischer was instrumental in supporting Mr Howard in facing down angry rural constituents during the gun buy-back and the introduction of Australia's tough gun laws following the Port Arthur massacre in 1996.

Mr Morrison said Mr Fischer's advocacy in that period was his "finest moment".

He also kept Nationals losses to a single Senate seat in Queensland during the rise of Pauline Hanson's One Nation in the late 1990s.

"Any Australian that is grateful for our gun laws can thank Tim Fischer for his courage at that time. Generations to come will owe him a great debt," Mr Hockey said on Thursday. 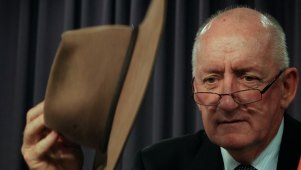 Former Nationals leader Tim Fischer has died after a battle with cancer. His life in photos.

After stepping away from federal politics in 2001, Mr Fischer was chairman of Tourism Australia before prime minister Kevin Rudd appointed him Australian ambassador to the Holy See in Rome.

He also served as Chair of the Royal Flying Doctor Service, Chair of the Crawford Fund, Chair of the Global Crop Trust and was a director or patron of more than two hundred not-for-profit and
community organisations.

Mr Fischer is survived by his wife Judy Brewer and sons Harrison and Dominic.

The family asked for donations in lieu of flowers to the Albury Wodonga Regional Cancer Centre Trust.