Autistic moms can face judgment while struggling with their own diagnosis and advocating for their children.

“You convinced yourself that you and our daughter have autism,” my husband yelled. “You did all this research and told the doctor what he needed to hear to diagnose you!”

“No, it wasn’t like that,” I said. “You know about all the testing we went through.”

“I can’t believe you brought her into this,” he said. “You’re like those mothers who make up medical problems about their kids. Why can’t you just let her be a kid?”

I knew then that if I couldn’t persuade my husband of five years to accept my daughter’s autism and my own, it would ruin our marriage and tear our family apart. Autism wasn’t just a medical diagnosis; it was part of our identities. To reject our autism was to reject us.

Doctors originally told me my daughter had just a language delay. But I knew this couldn’t explain the intensity of her emotional meltdowns. It took me hundreds of hours of medical research to understand that her difficulty socializing, repetitive routines, sensory issues and obsessive interests pointed to autism. I eventually realized that not only was she autistic — I was, too. A clinical psychologist diagnosed me and my daughter with autism spectrum disorder on the same day; she was 2 and I was 39.

“Do you think there’s something wrong with everyone in our family?” my husband asked a year later, when our then 2-year-old son was also diagnosed with autism spectrum disorder. As an autistic mother, I wasn’t surprised to learn that I had another child on the spectrum. A 2014 study found that parents of autistic children are more likely to have elevated levels of autistic traits, whether or not these traits are enough to qualify for a clinical diagnosis of autism spectrum disorder.

[Learn about sensory processing disorder and how it affects kids.]

In the study, when one parent scored high on a test that measures presence and severity of autistic traits (the SRS, or Social Responsiveness Scale), they were 52 percent more likely to have a diagnosed autistic child; when both parents scored high, they were 85 percent more likely to have one. Published earlier this year, the largest study ever conducted regarding genetic contributions to autism also found that inherited genes account for about 80 percent of autism risk.

But how was I supposed to parent our autistic children if my husband didn’t even think they were autistic — and doubted my diagnosis too? It is not unusual for family members and others who know autistic women to have trouble accepting their autism diagnosis.

“Doctors, teachers and most people have a male stereotype of autism in mind; when they think of autism, they think of ‘Rain Man,’ not of a woman or girl,” said Dr. Francesca Happé, Ph.D., a professor of cognitive neuroscience at King’s College London. “For women who are married with children, this goes against several stereotypes people may hold about autism: male, single, few close relationships, no children.”

The diagnostic criteria and assessment tools were developed primarily based on how autism presents in males, which means women can often be overlooked for an autism spectrum disorder diagnosis, depriving them of “an understanding of themselves as different, not damaged,” said Dr. Lauren Kenworthy, Ph.D., a professor of neurology, pediatrics and psychiatry at the George Washington University School of Medicine and the director of the Center for Autism Spectrum Disorders at Children’s National Hospital. 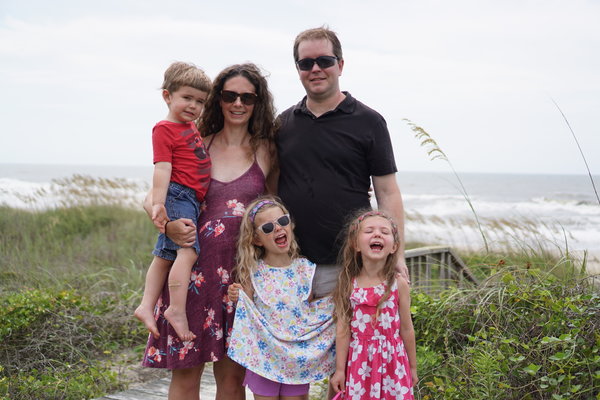 Sunyi Dean of Leeds, England, a mother of a 4-year-old nonverbal autistic son and a 7-year-old daughter who is on the waiting list for autism spectrum disorder diagnostic testing with the National Health Service, said that she worried about how her son will “relate to other people if he doesn’t learn verbal communication, but at the moment he is happy in himself and settled into his special school.”

With her home-schooled daughter, Dean said she was mostly ignored by professionals and other parents when she first raised concerns about autism, and now that she’s being taken more seriously, the process has been “very difficult and slow.”

As an autistic mother who was diagnosed after her son was, the biggest challenge for Dean has been finding time for self-care. “I always thought I wouldn’t mind the demands of parenthood because I’m not hugely social and don’t need to go out much,” Dean said. “But … I still need a lot of personal space, a lot of downtime to recover on my own, and that’s difficult to get with kids around.”

By the time I was diagnosed with autism, I was so overwhelmed by the responsibilities of working full time as an English professor while parenting three young children (a 1-year-old son and 2- and 3-year-old daughters) that I could barely keep it together.

The year before my diagnosis, the stress of being an undiagnosed autistic mother nearly cost me my life. I spent two weeks in and out of the E.R. complaining of stroke-like symptoms while battling uncontrollable crying fits brought on by my desperate attempts to get medical treatment. “You need to learn to manage your pain. The E.R. is only for patients who actually have emergencies,” a nurse said while handing me my discharge papers.

Though I didn’t know it at the time, my crying fits at home and in the hospital were autistic meltdowns. I would find out many months later that what I had experienced was a cycle of sporadic hemiplegic migraines, which can lead to a coma or, in rare cases, even death. I often wonder if I would have been treated differently by medical staff if I had had an autism spectrum disorder diagnosis then, or if I still would have been dismissed as an anxious woman who didn’t know how to manage her pain.

Research also suggests that undiagnosed autism has been harmful for women. In a 2016 study of 14 women, “many told us that the fact that their autism went unrecognized for so long had a very real and negative impact upon their mental health,” said Dr. William Mandy, D.Clin.Psy., Ph.D., an associate professor in clinical psychology at University College London. “A lack of a diagnosis means a lack of appropriately targeted support, which can place an autistic individual under huge stress.”

The published research on the experiences of autistic mothers is very limited. Two small qualitative studies in 2016 and 2017 consider pregnancy, childbirth and the postpartum period. The interviews of autistic mothers in these studies reveal challenges they had with sensory issues during breastfeeding and childbirth, and adapting to motherhood and infant care. Many said they felt unfairly judged by midwives and other caregivers on parenting skills and decisions.

Dr. Simon Baron-Cohen, Ph.D., a professor of developmental psychopathology and the director of the Autism Research Center at the University of Cambridge, and his colleagues have multiple studies underway to investigate the experience of autistic motherhood beyond the perinatal period. Presented at the 2016 International Meeting for Autism Research, their unpublished research involved an online survey of more than 300 autistic mothers. The study found the majority of them had extreme anxiety when talking to professionals about their children, encountered disbelief when they disclosed their diagnosis to professionals and struggled with daily parenting tasks.

“It should now be a routine requirement for autism researchers to collaborate with autistic people in every project,” Dr. Baron-Cohen said. “Without the input of autistic mothers, we would have missed key issues” — such as the fact that autistic mothers have increased rates of postnatal depression and have been falsely accused of Munchausen syndrome by proxy on the assumption that they were making up their children’s autism. He hopes this research will lead to more awareness of autistic motherhood experiences and the development of policy documents to improve the “woefully inadequate” services available for autistic mothers.

“Many autistic women are highly attuned to their children,” said Lana Grant, author of “From Here to Maternity: Pregnancy and Motherhood on the Autism Spectrum,” a book aimed at helping autistic mothers with the challenges of pregnancy and motherhood. “They may see their child struggling with the same things that they struggled with as a child. They read up on everything they can about a behavior or condition and then they go to the professionals for help.” Instead, they are seen as “too knowledgeable and hysterical,” Grant said, and dismissed as trying to tell professionals how to do their job.

She was already the mother of five of her six children (three of whom are on the autism spectrum) when she got her autism diagnosis at 38. “Autistic mothers are their own worst critics,” Grant said. She recommends that autistic mothers find a support network of other mothers on the spectrum, including those who are “out and proud” on social media, like her.

A few years after my diagnosis, my husband came to accept my own and our children’s autism. I stopped lecturing him, realizing that he would eventually understand our differences on his own terms. He started going to therapy appointments with our children. Then last year, at our kids’ Taekwondo class, I told the father of another child that we are autistic. “I know,” he said. “Your husband told me last time he was here.”

My husband now respects my parenting decisions, knowing that I can help our children by drawing on my own experiences living with autism. He is the supportive husband whom I married and a loving father who accepts our kids’ differences.

While the limitations of my autism sometimes make it difficult for me to handle the demands of parenting three young kids, I am now more willing to seek help from support groups and therapists. Learning to understand and accept my own and my kids’ autism was the best thing that ever happened to me because it empowered me to be a better mom.

[The right school can make all the difference for a child with disabilities, one mom writes.]

Jen Malia is associate professor of English at Norfolk State University and the author of the forthcoming children’s picture book “Too Sticky! Sensory Issues With Autism.”