It’s not as if Deborah Frith wants to put her eight-year-old son Jacob in a group home. She loves him deeply, and would give anything to protect him. But looking after a boy who has autism and severely challenging, often violent, behaviours has pushed the sole parent to her breaking point.

“I absolutely adore my child and I'd move hell and high water to keep him,” she says. “But it’s too much to sustain without the correct support. It’s a very unfortunate situation where you’re forced to suggest the things that come to you in your darkest moments.”

Ms Frith is one of two mothers, both sole parents, who have children with disabilities and severely challenging behaviours - including violence and physical aggression - and say they don't get enough NDIS funding for specialist behavioural support.

They say they have suffered numerous physical injuries while caring for their children, and that they are attacked on an almost-daily basis. Both have been driven to the verge of putting their children into group homes and both have lodged complaints against the National Disability Insurance Agency that could become test cases for their eligibility for funding.

Their complaints, lodged with the Australian Human Rights Commission are believed to be the first legal challenge of this kind in Australia. They allege the length of the NDIS waiting period is causing their children huge detriment compared with children with other disabilities.

They allege they can’t get their children’s plans approved or reviewed in a timely manner. Ms Frith had to wait more than a year to learn that Jacob’s application for behavioural support had not been approved. During that time his behaviour worsened, and she is appealing the decision.

It’s a form of family violence for many of those families, it’s something that is hidden away.

Their complaints also allege the NDIA planners who decide if their applications should be approved do not have the necessary qualifications to make competent decisions about what behavioural support their children need.

Ms Frith says caring for Jacob is unrelenting. Her day starts at 4.30am when Jacob wakes up. She home schools him, and takes him to eight to 10 medical appointments each week.

Jacob, who also has an auto-immune psychiatric disorder and attention deficit hyperactivity disorder (ADHD), can be physically aggressive. He bites and scratches his mum and other adults and children. His behaviour is not malicious, says Ms Frith, but he finds it difficult to control his impulses and does not have a way to communicate, which means he is often deeply frustrated.

Stress has had a profound effect on Ms Frith’s health, and she has developed an auto-immune disorder. But she is unable to stay in hospital when needed because there is no-one else to look after Jacob. 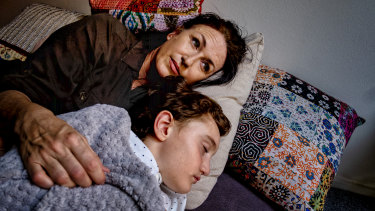 Ms Frith alleges Jacob was restrained and traumatised during his education at a specialist autism school, and this had a significant effect on his behaviour. She is currently taking the state education department to court, alleging discrimination.

A spokesperson for the state education department said it had not been served with legal proceedings in relation to Jacob. But court records show the matter was filed with the Federal Court in September.

“When allegations were first made about the physical restraint of this student, enquiries were immediately made," the spokesperson said. "Those allegations have not been substantiated and are strongly denied."

Ms Frith wants her son to get funding for behavioural support at Irabina, a well-regarded support service that specialises in children with autism.

Irabina chief executive Deb Goldfinch said children who come to the service have often been expelled from school because their behaviour is so difficult to manage. They may harm themselves significantly enough to go to hospital or be very aggressive, she said.

“It’s a form of family violence for many of those families, it’s something that is hidden away.”

The NDIA was becoming more adept at recognising the multitude of support these children need, she said.

Disability advocate Julie Phillips, who has helped the two mothers lodge their complaints, said she had two other clients also in the same situation who were “collapsing while waiting for help”. Ms Phillips said the NDIS processes were so slow that children or adults with severe behaviours of concern were putting themselves and others at risk.

In the past financial year the Department of Health and Human services has provided voluntary accommodation for 61 children who required specialist disability care and support.

These arrangements are voluntary and do not constitute a legal relinquishment. The parents retain parental responsibility and remain active in the child’s life.

In response to an inquiry from The Age and The Sydney Morning Herald, an NDIA spokesperson said it would contact Jacob’s family this week to reassure them he would receive proper support.

In June, the average wait time for a first NDIS plan to be approved was 133 days (more than four months). In September it had reduced to 88 days, or three months.