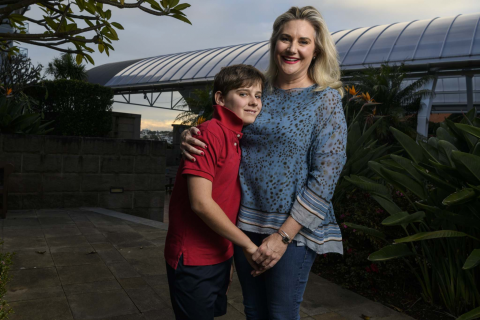 When Liberal Senator Hollie Hughes was elected to Federal Parliament, she paid tribute to her “gorgeous son Fred” who was diagnosed with autism in 2012, and vowed to pour her “blood, sweat and tears” into autism and disability support.

“Fred is the light of our family’s life in so many ways,” Senator Hughes said in her maiden speech in 2019. “Whether it’s all the developmental milestones he’s passed, when doctors said he wouldn’t; his love of Godzilla, New York and San Francisco, old-fashioned media; or just he and I watching David Attenborough specials, there is no one more loved, or who brings more love to this world.”

Senator Hughes, who established the Country Autism Network, told the Parliament she was a “huge believer” in the National Disability Insurance Scheme, but warned there was “a lot more work to be done to make it truly fit for purpose”.

Two years later, Senator Hughes is fighting her own party’s controversial plan to introduce independent assessments to determine eligibility and funding for the scheme.

Last week, Senator Hughes described the assessments as “dehumanising” and “offensive” in The Canberra Times. She also outlined her concerns to the new minister for the scheme, Linda Reynolds: “I told her I was a mother first and a senator second.”

Senator Hughes told The Age the independent assessment trial had caused anguish to participants and focused on people’s deficits rather than their goals.

“I explained to her that parents feel like they are begging for their child and I am not sure that was ever the intent,” said Senator Hughes, who is a member of the Joint Standing Committee on the NDIS.

The federal government wants to introduce independent assessments for NDIS participants, which would involve a government-contracted allied health professional assessing a person with a disability instead of using reports from the person’s own medical specialists.

National Disability Insurance Agency chief executive Martin Hoffman has said they are necessary to obtain a “consistent, standard and unbiased set of information” on which to make a fair decision.

But a trial has been heavily criticised. Participants and disability groups fear the independent assessments won’t give a true picture of people’s needs, will be conducted by professionals with no expertise in their disability, and are a stealthy way of cutting costs.

Disability Discrimination Commissioner Ben Gauntlett, a quadriplegic who participated in the trial, was assessed by a physiotherapist. He said his experience was unsatisfactory and he felt their report didn’t accurately reflect what he had told them.

The assessment involves performing a task and a series of questionnaires, known as assessment tools, with the score used to determine the budget.

Senator Hughes said she had seen independent assessment forms and been contacted by a number of people with concerns.

“The problem is this is a tick-a-box functionality assessment at the moment, there is absolutely nothing that aligns with people’s goals,” Senator Hughes said.

Every trial participant she had spoken to was asked to perform a task such as peeling a vegetable, making a cup of tea or putting the bin out.

“Now if your goal as a 23-year-old man with autism is to get back into work, what does that matter if you can peel a potato over the sink? Do you want to be asked in front of your parents or in front of your partner whether you need assistance with sexual activities or keeping a friendship going? They’re invasive. If you don’t have a disability, no one else is going to ask you that.”

Mr Hoffman told a committee hearing last month that sensitive questions such as asking about a person’s sex life were being reviewed and might be optional.

Senator Hughes said she would be concerned about Fred, who is now 11, doing an independent assessment. “I don’t see how whether he can take a bin out is relevant to how he’s going to cope with getting public transport to school.”

The government had planned to roll out the assessments by the middle of the year, but Senator Reynolds paused them when she took on the role in April, saying she would closely assess the independent trial outcomes before introducing legislation.

“I am committed to a genuine consultation process for the NDIS to make sure the scheme is sustainable for future generations to come,” she told The Age in a statement.

“Since becoming minister for the NDIS, I have been consulting extensively with the disability sector, NDIS participants, providers, as well as state and territory disability ministers — and I will continue to do so.”

Senator Reynolds said there was no directive for independent assessments to reduce the amount of funding participants received. “At each plan review, a participant’s plan may go up or down depending on their functional capacity and circumstances,” she said

She said the Morrison government would always fund the reasonable and necessary supports for those with permanent and significant disabilities.

”The budget for NDIS supports has grown by $17 billion over the last two years and will continue to do so in the coming years,” she said.

“However, I have also been clear that as custodian of the NDIS, we have a collective responsibility to ensure we deliver a scheme that grows sustainably, in order to enable the enhancements to participant experience.”

Senator Hughes said she welcomed the minister listening to her and others’ concerns and acknowledging their pain.

“The reality at the moment is there’s very little trust between the agency and participants and that’s reflected in participants’ constant state of fear that it’s all about cutting their funding. I think Linda’s got a great opportunity to rebuild trust, restart the conversation and reframe it.”

A Liberal senator has joined a growing number of critics of her government's controversial plan to introduce independent assessments for the National Disability Insurance Scheme (NDIS).

Senator Holly Hughes has added her voice to growing criticism over independent assessments
The Liberal senator has urged her own party to look at providers, rather than people, for savings
Ms Hughes says the changes to assessments are invasive and inappropriate

Hollie Hughes, whose 11-year-old son Fred has autism, told RN Breakfast on Monday the changes would put allied health professionals, some with no knowledge of the particular condition a client has, in charge of assessing funding needs.

"Quite frankly, my senior behavioural therapist who has been with us for over 10 years has a much better idea of what Fred can and can't do than a speech therapist who has never known anyone with autism before," Senator Hughes said.

The NDIS has been trialling the use of independent assessors, instead of relying on an individual's medical advice, when considering new applications for funding under the scheme.

Under the change, independent allied health professionals spend one to four hours with a person to assess their needs and eligibility.

Senator Hughes said the assessment process included a set list of questions, but NDIS participants needed to be treated as individuals.

"It's been people going in and asking a very set list of questions or a series of tasks; peeling a piece of fruit over the sink, making a cup of tea, taking the bin out," Senator Hughes said.

"Then there are questions like, 'In the past 30 days have you needed support to maintain a friendship, conduct sexual activity?'

"The questions are invasive, inappropriate, but on top of that they had nothing to do with what a person's goals were."

Senator Hughes said the NDIS had been a "game changer" for her son Fred and the whole family.

"I'm a massive fan of the NDIS. When Fred was diagnosed it didn't exist," Senator Hughes said.

The government has marketed the changes as a method of making the system fairer and more responsible.

The cost of the scheme is expected to reach more than $30 billion by the middle of this decade.

Focus should be on providers, Hughes says

Senator Hughes said the government and the agency in charge of the scheme needed to look at providers rather than participants for savings.

"The people most focused on the sustainability of schemes are the parents of kids with disability or people with a disability because they need it to succeed more than any bureaucrat needs a job. We need it," Senator Hughes said.

"It's getting a bit insulting that it's consistently looking at the participants and saying we need this to be sustainable.

"No-one is looking at the providers, who are charging obscene amounts of money in some cases for appointments."

The Minister for the NDIS, Linda Reynolds, said the government was committed to improving the experience of participants, while ensuring ongoing sustainability.

"We need to give genuine flexibility, choice and control to participants so we can deliver the NDIS as it was originally intended," Senator Reynolds said.

"The scheme is deeply inequitable in its application and I am deeply committed to introducing some form of functional assessment to bring fairness and equity to the process.

"The final form will be decided as a result of the consultation process underway."