Readers share stories of school refusal in Australia: ‘It scarred us and changed us forever’ With education and mental health systems under pressure, families are experiencing distress as a result of children refusing to go to school. Here are some of their stories

We heard from parents, carers, educators and wellbeing counsellors, and former students. Readers spoke of children whose ages ranged from kindergarten to high school, some are dealing with more than one child who can’t attend school. 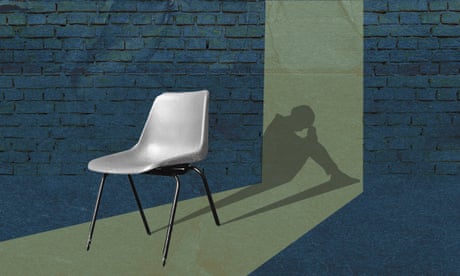 ‘Families can fall apart over this stuff’: the children refusing to go to school

This is against a backdrop of both an education and mental health system under stress post-pandemic. In many instances the distress about going to school originated with bullying, in others the issue was a system not catering to neurodiverse children. Many parents have given up work to help their children, others talk about lack of support and being judged, and teachers under stress.

All readers were united by the experience of acute anxiety experienced by both children and families amid a crisis that has long-term impacts and for many, has no end in sight. Here are some of the themes that emerged from the responses.

‘My happy, very chatty daughter would end up non-verbal, curled up in the fetal position’

Children distressed about attending school can present in many different ways – readers told of stomach aches, vomiting, shutting down, lashing out, and in some cases, masking anxiety for years until it becomes unbearable.

“Started in kinder … upset at drop off, then at home feeling unwell or not wanting to get dressed, then not wanting to get out of the car, then not getting in car. By year 3 he was running and hiding under my car or tying himself in rope to his bed. If I forced him into the car it took an hour to get his straps on while he hit, bit and kicked me.” – Anonymous

“My daughter [aged 10] was struggling for up to two hours trying to get ready for school. My happy, very chatty daughter would end up non-verbal, curled up in the fetal position. We were all in tears and decided to stop.” – Denise Craig, Adelaide

“Teachers said my child was OK once at school [he would mask his distress] but different at home [started in prep, now aged 15]. Daily major meltdowns – screaming, crying, swearing, punching, kicking, throwing. Often extreme, causing damage to property, injury to self and family.” – Anonymous

For many children, bullying can be part of the reason why they don’t want to attend school

“My child [aged 10] experienced daily teasing, insults, shoving and similar from an older student for a long period this year … The school seemed to feel that he was exaggerating or overreacting … He no longer sees school as a safe place.” – Anonymous, inner west Sydney 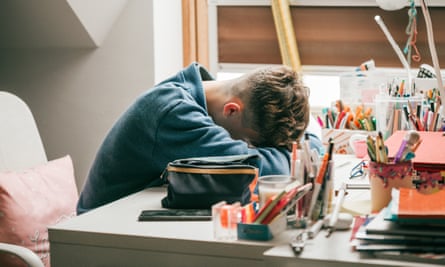 Many readers’ kids had experienced a punitive approach at school, which compounded their anxiety. Photograph: Carol Yepes/Getty Images

“My son [aged 12] experienced some pretty severe bullying at the beginning of year 7 and refused to go back … The school was supportive and used restorative practices for the bullying but insisted I force him [to attend school]. It caused trauma and anxiety.” – Anonymous, Magnetic Island, Queensland

Many readers say the system hasn’t caught up with the needs of their neurodivergent kids.

“My son [now aged 16, started refusing school in grade 5] is autistic and the school environment can be overwhelming for him. We have encountered teachers … who refused accomodations and viewed his ‘school can’t’ as bad behaviour and a choice. I have been viewed as a bad parent and a helicopter mum.” – Neroli Marshall, Central Coast NSW 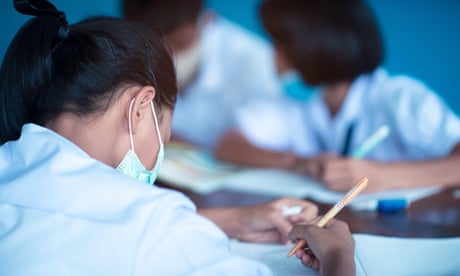 “My daughter [now aged 15] was diagnosed with anxiety and depression. I had been told … that because she was social, compliant and made eye contact she couldn’t possibly have autism [but] she was indeed [eventually] diagnosed. The schools and teachers are very unaware of what autism in girls looks like, and certainly were unable to offer her the support she needed.” – Anonymous

“The school did not pick up his learning difficulties nor his anxiety, I was told they thought he [age 11] was faking. He masked his difficulty with focus and learning by being the joker in class. Several teachers treated him like the naughty boy, he was always in detention [the worst punishment for a child with ADHD].” – Anonymous

Many readers’ kids had experienced a punitive approach at school, which compounded their anxiety.

“Regardless of a diagnosis, there are clearly things at school he [aged 10] can’t cope with – change, certain sensory input, some social situations … The authoritarian [instead of authoritative] structure in the school turns all of his interactions with them into an ‘us and them’ battle from both sides. A punitive behavioural approach … has been proven ineffective in parenting, why on earth would it work in schools?” – Amelia Hourigan, Adelaide 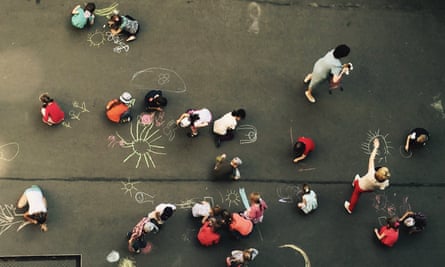 Among the stressors cited by parents were large class sizes and an outdated school system. Photograph: Sonja Belle/Getty Images/EyeEm

“Both [10 and 13-year-old] are autistic … a change in principal and special ed staff who just want to medicate, exclude and suspend has made life extremely stressful for all concerned. Rewards turn into punishment when they are not able to complete work on bad days … Don’t just send kids home without looking for the why. It can be such a small change in a lot of circumstances.” – Judy, Adelaide

“We need to drop the ridiculous draconian, legal threats that come with poor school attendance. Families in distress need support not threats. The day I received a letter threatening legal action was the last day my son attended school.” – Anonymous, experienced the above in NSW and later moved to Victoria

A one size fits all approach, an outdated system, too much emphasis on assessment – especially towards year 12 – large class sizes and a focus on rules and regulations were cited as stressors by readers.

“School, for my son [aged 14], feels like a prison, where he is forced to sit still and engage in curriculum that has little relevance or application to him and delivered quickly, often without differentiation, by teachers, whose jobs have become more about assessing and reporting, rather than engaging and fostering a joy for learning.” – Anonymous

“The current school refusal paradigm is heavily focused on the family environment and individual child. However we need to see school refusal as a meaning-based response to the wider ecosystem: not just families and the child but the schooling system, its staff and the school environment and our wider hyper competitive, dominator social system.” – Anonymous

“The focus on rules and regulations and enforcing compliance with homework created a lot of anxiety for my daughter [aged 8].” – Ruth, Toowoomba Queensland, now ACT

“They [aged 12] know they’ve missed a lot of the curriculum and now can’t face questions about their absence from their peers or their teachers.” – Anonymous

‘Finding help can be costly and confusing’

Readers seeking professional help have had to wait months if not years for the right support and spend exorbitant amounts of money once they can access help.

“We spent six months trying to get help due to the ridiculous wait lists and he is now on antidepressants and ADHD meds but is still unable to go to school.” – Anonymous 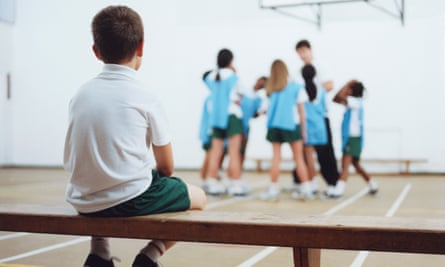 Lockdowns during Covid have either exacerbated school refusal or triggered it in some kids. Photograph: Alistair Berg/Getty Images

“There was a total lack of understanding from the primary school and it was nearly impossible to get any type of diagnosis or assistance due to waiting lists for specialists. The school just decided [Dom, now 17] was a bad student. All of the rhetoric was that it was his fault, rather than look for a reason.” – Ruth Weeks, Newtown, NSW

“There is no longer any support for kids who don’t have NDIS funding – which you can’t get without a diagnosis and can’t get a diagnosis because of the wait times.” – Amelia Hourigan, Adelaide

‘It all stems from the lockdowns’

Lockdowns during the pandemic, or general anxiety around Covid seems to have either exacerbated the problem, or triggered it in some kids.

“It all stems from the lockdowns … during which our [nine-year-old] was able to do the full day’s program in about an hour. His confidence and personality thrives without the social pressure of school during home school. He also saw [and still sees] us working from home, so challenges why school needs to be in person … the social dynamic is the biggest challenge. The idea that all kids can snap back into self entertainment for 90 mins of recess/lunch a day after spending such a huge percentage of their lives without meaningful social contact is problematic.” – Anonymous, Port Melbourne 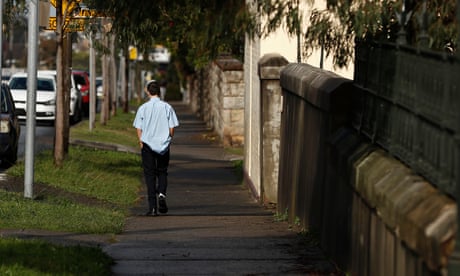 ‘Early signs get missed’: moves to support Australian families whose children refuse to go to school

“The kids started school [twins, aged six] when the fires were still affecting the region. They went from evacuation to school to flooding then coronavirus and more being flooded in, as well as the frequency of sickness circulating through the school.” – Anonymous

‘Parents need not to be judged’

Readers spoke of being judged or shamed. Many spoke of having to give up work to care for their kids, and the resulting financial stress.

“It’s scarred us. Changed us forever. PTSD for both of us. So much shame, judgment, criticism. Bad advice. Useless, clueless schools in handling it.” – Anonymous

“Parents need not to be judged. We worked so hard to get [daughter, aged 14] to school. She wanted to be there, we wanted her there.” – Anonymous, Melbourne

“I homeschool my kids now. It took the pressure away from them and they are much happier. However, I am a lot more stressed. Financially I am struggling. I had to leave a job I loved and open a business to be able to do this. I am constantly working while at home. I am burnt out.” – Anonymous

“I have put in very firm boundaries with my family about not giving me ‘advice’ and just being supportive. I do not discuss it with anyone, in any depth, except with a few other parents who have similar challenges or a few non judgmental friends. It is too exhausting to repeat the daily dramas and then get a suggestions like ‘Have you just tried sitting him down and talking to him, or giving him a hug?’” – Kirsty Keating, Coogee, Sydney

“Our teachers, who do so much unsung classroom-based wellbeing work, are now exhausted. What we did pre-pandemic to try to return students to school is now unsustainable with the resources we have [and don’t have]. I honestly don’t know how mainstream schools will manage going forward, given that this is just one of the escalating [and time-consuming and resource-intensive] issues schools now face.” – Caroline, student wellbeing coordinator of an inner-Melbourne public secondary school

Some answers have been edited for brevity and clarity.