When Tanika Davis's son was diagnosed with autism at just two years old, the Worimi mother was confronted with the stigma surrounding the developmental disorder, but also surprised at the lack of consideration for Slade's Indigenous culture.

Six-year-old Ava Renwood is an aspiring athlete with big dreams of a career in sport.

But her mum Ashleigh Brook fears her options are limited by the lack of inclusivity and understanding of athletes with autism.

Historically, the adult years have been ignored in autism research, despite that these years representing the greatest proportion of individuals’ lives. Hence, limited information and guidance exists for autistic adults, their families and those who may provide support (e.g., health services, employment services, higher education) about trajectories from late adolescence through old age.

South Australia's autism community will get its own state government minister in a national first and a decision hailed as a major step towards greater inclusion.

Emily Bourke has been appointed assistant minister for autism in a bid to ensure people with the neurological condition are better represented.

Premier Peter Malinauskas says he has heard from many South Australians that the time has come for a dedicated effort from government to make autism a priority.

"That is why we have created this new role," he said on Monday.

When Chris Varney was in Year 2 he presented his teacher with an incredibly detailed visual chart of the royal families of Europe from the 14th to the 19th century.

“I just felt I had found a new way of seeing the last millennium. No wonder we have so many revolutions and conflict, these families were way too connected, small community, completely out of touch,” he quips during his TED talk Autism: How my unstoppable mother proved the experts wrong.

A Victorian mother is locked in a battle with the National Disability Insurance Agency over her daughter’s “voice”. At least that’s how Melanie Stephens describes the “talker” device her daughter Ella has been using for four years.

Why we need to start talking about the risk of trauma for those with autism.

It is a sad truth that the majority of the early research into autism spectrum disorder (ASD) was done with young children, most of whom were boys. It is hard to find research into the lives of adults with autism before 2000 and virtually impossible to find research on adult women with autism. As an autistic woman, it is frustrating for me to know that the quality of life of adults with autism was ignored for decades. This has led to several massive problems that are only now coming to light. One of these problems is the extraordinarily high number of women with autism that have been through serious trauma and meet diagnostic criteria for posttraumatic stress disorder (PTSD).

My son Philip has developed a terrifying habit. He'll shake me awake in the dead of night to tell me what he scored on his most recent university assignment.

In his defense, he got a pretty awesome mark. 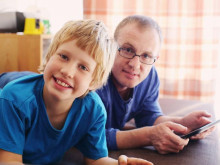 Autism CRC, an independent national research organisation focusing on best practice in relation to autism, has released a draft version of the first ever Australian national guideline to supporting autistic children and their families.

Once finalised, the National Guideline for supporting the learning, participation, and wellbeing of autistic children and their families in Australia will be used to ensure children can access the safe and effective supports that they want.