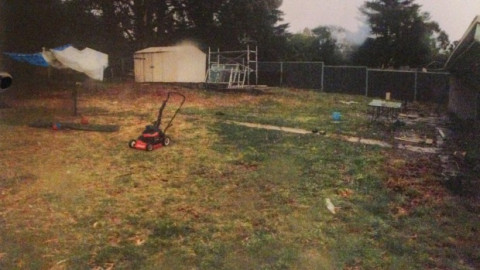 Warning: the following story is likely to be very alarming for people.

Dressed in only a fleece jumper and track pants, the 11-year-old was placed on a garden chair in the cold and dark surrounds of an aluminium shed.

From where he sat in the single-digit temperatures with his arms bound to the chair with masking tape, the heater would have been in view. The boy would also have recognised that the much-needed source of heat wasn't plugged in.

The autistic boy was unsettled and, before long, his stepfather, a self-styled warlock who claimed to practise magic, carried his son still in restraints and placed him under a cold shower, a method used to calm the boy down.

The boy was taken back to his lonely spot in the shed, next to tools and a box of packing tape, where police allege he suffered hypothermia. The heater in the back shed that was not connected on the night the boy suffered hypothermia. Photo: NSW Police

Hours later, the boy, whose autism had posed a great challenge to his parents, was dead.

Police later discovered that someone had searched the internet for "how to treat hypothermia" on the home computer in the days before the boy died.

However, investigators could not ascertain who carried out the search.

For more than four years, the stepfather - who penned an online blog about the power of gems, crystals, the moon cycle and colours - blamed everyone else for the boy's death.

Those he blamed included the medical system "[which] allowed us to treat our son in the fashion we did" and the detectives, judges, doctors and government departments "that let [the boy] die".

His denials were documented in a rambling online manifesto titled "Justice4[his son]".

"I feel every time I left my practice of magic, I have had horrifying events happened to me in life, especially when my son died because the system let him and my family down," he wrote on his website.

"That's why I have gone back to magic, to protect my family from the evil out there in the world."
But on Thursday afternoon, the magician, who cannot be identified for legal reasons, fell on his sword and pleaded guilty to the manslaughter of his wife's son in NSW's Central West in October 2011.

He handed his staff, complete with an intricate carving and crystal ball, to his wife before he was handcuffed and led down to the cells at Sydney's Downing Centre Court Complex.

His wife faced her own trial at the end of last year after pleading not guilty to manslaughter. However, her verdict cannot be published yet due to a non-publication order.

The couple lived with the victim and two of his siblings in an unassuming weatherboard home in a tiny town on the western side of the Great Dividing Range.
The victim was diagnosed with autism when he was three or four years old and was taken out of a local primary school in 2010 to be home-schooled.

A year later he was having trouble sleeping and soiling himself around the house.

Several hours before the boy died, his mother saw her partner rub the boy's face in his own faeces, for which he later apologised.
That night, the boy was moved to the backyard shed after urinating on his blanket and pillows.

After he was given a cold shower, he was taken back to the garden shed - still in his wet clothes - where temperatures in the area that night dropped to 5 degrees.

Soon his tiny frame, weighing 24 kilograms, went limp. By the time his stepfather summoned his wife to the shed, the little boy's tongue was hanging out of his mouth.

In a panic, his stepfather placed him under a warm shower while an ambulance was called.

The stepfather claimed to have seen an array of medical specialists about how to deal with their son's condition and described 2011 as a nightmare.
"At the end of our son's life, we begged the pediatrician to do tests or give our son sleeping tablets to help our son sleep as he was getting only about four hours sleep in a 24 hour day ... " the stepfather wrote online.

He will be sentenced in April.