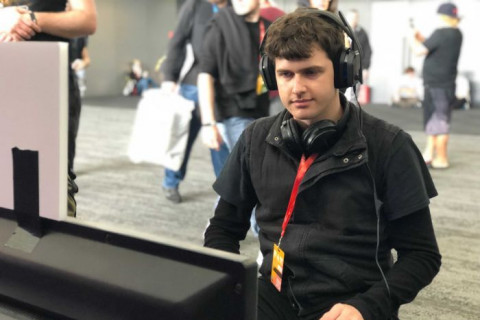 In addition to entertainment, Mr Hennessey said the power of video games to enhance empathy with others is undervalued.

"Really, games can do anything," he said.

"It's the player. It gets more emotional because the player is … the one who does it."

While it might be a simple prototype, the Brisbane-based teenager said his game doesn't shy away from the realities of its subject matter.

"The idea here is the game has these autistic mechanics, it tries to recreate it and players can go through the story," he said.

"Players can interact, they can educate themselves by experimenting with the gameplay."

To achieve success players must manage a variety of bars and meters, which oscillate based on the intensity of sound, the conditions of the environment and the people players interact with.

Traditional combat is replaced with speech battles, where players must communicate with dark figures that reflect the inability of autistic individuals to perceive body language.

"Autism is really all about social cues and socialising, so that's the major one that helps get players invested, show them what it's like," said Mr Hennessy.

"There's been many books and movies written about autism and stories about autistic characters, but with those other mediums, they're all linear, so you only ever know as much as what's told to you through those mediums."

The next stage for the games industry

An Aspie Life was one of six games on display at the NEXT Exhibit, a showcase for game developers from under-represented communities.

The exhibit debuted at the Penny Arcade Expo Australia (PAX AUS) in Melbourne, the largest video games convention in the southern hemisphere.

Ally McLean is the creator and curator of the NEXT Exhibit, and said putting Mr Hennessey's game on display was a no-brainer.

"Because it was Bradley's first game, being a self-taught developer, there's something really refreshing about the game mechanics themselves," she said.

"Bradley's taking his personal experience with his life and translating it into something that people can feel empathy for and connect with, and that's so important."

Ms McLean said diversity in the games industry continued to be an issue, and that diverse development teams make better games.

A 2016-17 report by the Interactive Games and Entertainment Association found males made up 81 per cent of Australia's video game developers.

By bringing in diverse teams from different disciplines, artforms and life experiences, Ms McLean said gamers "get more depth to the experience, and we get games that surprise and delight us."

Photo: In An Aspie Life, the avatar is highly sensitive to the surrounding environment (Supplied: Bradley Hennessey)

Already hard at work at a follow-up release, Mr Hennessey said the opportunity to display his work on the country's biggest stage was invaluable.

"Getting the opportunity to see people play and what they're experiencing and what they think of it, it's really rewarding as a developer."

Despite expected revenues of $137 billion in 2018, according to games market analyst NewZoo, Mr Hennessey said there's still plenty of room in the games industry for experimental experiences.

"Everyone loves triple-a games and those action blockbuster games, that's the main thing gaming's about," he said.

"Like movies, having developers experiment with new ideas or concepts, even if they might fail or be something different, it gives you ideas to what you can actually do and expand the medium and its potential."