Three special schools in Melbourne will be investigated over a series of allegations of “violence, abuse and serious neglect” of students with disabilities over the past 10 years.

Victoria’s Department of Education and Training has launched an investigation into multiple claims of mistreatment of vulnerable children at Marnebek School in Cranbourne East, Jackson School in St Albans and Southern Autistic School in Bentleigh East.

Among the allegations that have sparked the probe are claims that children were restrained in harnesses and had their hands bound; and that children with behavioural problems were routinely isolated in “time-out” spaces including outdoor courtyards, corridors and even a windowless storeroom.

The allegations include a claim that a child was dragged along the floor into a seclusion room.

Incidents provided to the department as evidence span from 2011 to early this year and include statements from former school staff as well as parents and children.

“There are people's lives behind these cases,” Ms Phillips wrote to Mr Merlino.

The trauma and distress alleged to have been inflicted on students at the three public special schools had led to “disengagement from government schooling; a life without education going forward; a life without the ability to communicate”, she said.

The Department of Education and Training confirmed on Friday that it had commissioned an independent investigation into the three schools.

“The department has now engaged external lawyers to provide advice on the allegations you have raised of violence, abuse and neglect of students at these three schools,” Ian Lanyon, director schools and regional services, said in an email to Ms Phillips.

The investigation will be conducted by Peta Nowacki, a specialist investigator at workplace law firm Working Together.

Ms Nowacki said she was still waiting to receive a brief from the Department of Education on the terms of reference of the investigation, but insisted she would act "swiftly and independently" to achieve "natural justice".

But advocates for children with disability criticised the process, with one arguing an investigation commissioned by the department could not be truly independent.

Some of the cases likely to be investigated are currently being heard in the Federal Court. Among them is the case of Mathew Snell, a 21-year-old autistic man who attended Jackson School until March 2016, when it is alleged he was unofficially expelled.

His father, Geoff Snell, obtained through freedom-of-information requests about 80 school incident reports in which Mathew was secluded in a “time-out” space.

Mr Snell said he was summoned to the school to collect Mathew after an episode in which he had turned over classroom furniture, and arrived 20 minutes later to find his son being held in a small storeroom.

“They had him in a storeroom which had no windows, no fresh air … they were holding the door shut so that he couldn’t get out,” Mr Snell said.

“He was laying on the floor curled up in a ball sweating like a pig and he was red.”

Deborah Frith sent her son, Jacob, to Southern Autistic School between 2016 and 2018, but pulled him out in grade 1 after he told her he had been tied up.

Jacob, who is autistic, was sometimes violent to other students in the school. Ms Frith believes the school resorted to seclusion and restraint to contain him. 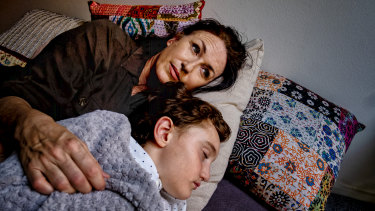 “One day, he said, ‘no school’, and he kept taking off his uniform,” Ms Frith said. “I asked him what was wrong and he said ‘the yellow rope’.”

After the incident, Jacob began tying up his dolls, Ms Frith said.

Seclusion and restraint of children are permissible under department guidelines in exceptional circumstances, when children pose an imminent threat of physical harm to other children, staff or themselves.

The department’s guidelines state restraint and seclusion “must not be used as a routine behaviour management technique”.

But data on the use of seclusion and restraint on Victorian students with a disability suggests it is common practice.