The government is appointing independent assessors to review everyone on the National Disability Insurance Scheme to ensure the funding is fairly distributed and not just given to "those who can pay the most for a report".

There are concerns in the government that wealthier people are getting a bigger share of the taxpayer funding that covers therapy, equipment and other costs of disability, while those in greater need are potentially missing out.

Government Services and NDIS Minister Stuart Robert said the government would introduce independent assessment from early 2021, removing the need for applicants to spend time and money on reports from various health providers to prove eligibility for a package. 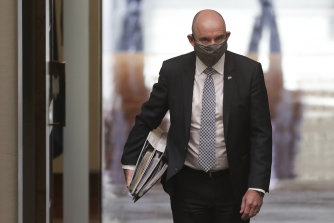 Minister for the NDIS and Government Services Stuart Robert says the independent assessments will be fairer, faster and simpler.Credit:Alex Ellinghausen

Mr Robert said this would be a "simpler, faster and fairer" way to determine someone's eligibility and the appropriate funding.

"All Australians with significant and permanent disability deserve objective and unbiased access to NDIS supports, not just those who can pay the most for a report," Mr Robert said.

Last week the National Disability Insurance Agency revealed the independent assessments will take one to four hours and be conducted by a panel of private providers such as psychologists, occupational therapists, physiotherapists and speech pathologists - but not the person's usual therapists. 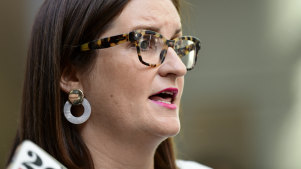 An NDIA spokesperson said by making assessments free, the agency was removing a barrier to access and saving people with disabilities $130 million to $170 million a year.

Existing NDIS participants will also be required to undergo an independent assessment from mid-2021 when the plan is normally reviewed including at trigger points such as starting school or other life-stage events. The NDIA said this would ensure consistency and fairness across the scheme.

Mr Robert said independent assessments were first recommended by the Productivity Commission in the 2011 report that led to the scheme's creation and more recently by the review by former senior public servant David Tune.

John Walsh, who was a member of the Productivity Commission at the time and served on the NDIA board from 2013 until the end of August, said he was proud of the scheme but it was "still to some extent unfair across the population" because funding could be influenced by how articulate someone is and the number of reports they had attained.

He said he "would be surprised" if the agency had not found funding was concentrated in higher socioeconomic postcodes. The agency said this data was not publicly available.

"If I had a magic wand, I would have done this right at the start," Mr Walsh said. "The amount of angst and fear that's a result of this announcement is something that I think could have been overcome if this scheme had been thought through a bit more carefully right at the start, and it was recommended way back in 2011."

The departure of Mr Walsh, who is a quadriplegic, means the NDIA board no longer has anyone with lived experience of disability. 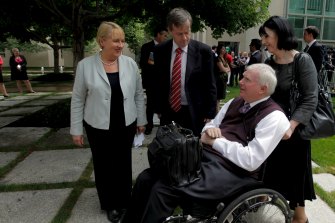 John Walsh in 2011, then Associate Commissioner of the Productivity Commission, meeting with ministers in the then-Labor government, Jenny Macklin and Bill Shorten.Credit:Alex Ellinghausen

Labor's NDIS spokesman Bill Shorten said he was still awaiting a requested meeting with Mr Robert and there were "genuine fears that this will be a way to exclude people from the NDIS".

While Mr Walsh said the independent assessments could actually result in some packages being increased, mmany in the disability sector are concerned the process will provide cover for further cost cutting. Some NDIS participants have already had their packages trimmed through reviews and Treasury figures reveal the government underspent $4.6 billion on the NDIS in 2018-2019 because of slower-than-expected entry to the scheme.

Amaze, the peak body for autistic people in Victoria, warned "time-limited, one-size-fits-all assessments" could particularly disadvantage people with autism, who represent about a third of people with NDIS packages.

Synapse, a peak body for acquired brain injury, described the proposal as a "tick and flick observation method" that was "illogical and offensive" for the broader disability sector and "entirely inappropriate" for Indigenous communities.

Craig Wallace, a disability advocate who uses a wheelchair, said there was already a shortage of OTs and other providers and appointing some of them as independent assessors would make this worse. He also said it was "a huge mistake" to force vulnerable people to be assessed by people they didn't know and trust - as someone who had experienced abuse in the health system, there was "no way he was letting a strange physio anywhere near him

Disability advocate Elisha Matthews said when she applied for the disability support pension, she was assigned a "random chiropractor" with no knowledge of her neurological condition (Parkinsonism) to determine eligibility. She feared independent assessment under the NDIS would be similar and added it would do little to reduce the cost burden since the assessors could not make a diagnosis.