Anxiety, not autism is holding many children back at school, researchers say 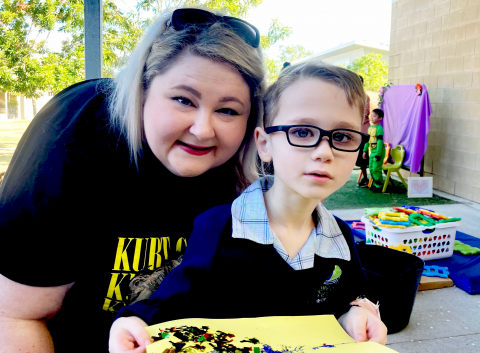 Queensland researchers say anxiety — not autism — is preventing many children on the spectrum from flourishing at school.

The Griffith University Autism Centre of Excellence is trialling a program to reduce anxiety in pre-schoolers before they attend prep and are seeking families to take part.

Associate professor Dawn Adams said anxiety was up to eight times higher in children who had autism than those who do not.

"Four in 10 children who have an autism diagnosis will also have an anxiety disorder," Dr Adams said.

She said rather than be confined to worrisome thoughts, "autism-specific anxiety tends to present as behaviour".

"That might be children hiding or avoiding, or repetitive behaviours to help reduce the anxiety," she said. Dr Dawn Adams said anxiety was up to eight times higher in children who had autism than those who do not.(ABC News: Sally Eeles)

William Wallington, 6, has autism and a diagnosed anxiety disorder.

"A lot of his daily routine is dictated by how much anxiety he actually has," Ms Wallington said.

"He will basically go into that fight or flight where he loses control of himself." Dr Adams said she believed it was the anxiety — not the autism — that was holding children back.

"We've done some research and we know that anxiety actually predicts quality of life more than a child's level of autism," she said.

"What we tend to see is children with anxiety and autism dropping off from what they could achieve as they get older as the demands of school grow.

Researchers believe the repercussions may extend into adulthood, with anxiety preventing some people from reaching their full potential.

"They are often under-employed and take low-skilled jobs with fewer hours … because their anxiety impacts what they can manage to deal with in a week," Dr Adams said.

To try and change the outlook for people with autism, researchers at Griffith University's Logan campus are now trialling an early intervention program for children before they head off to school.

"Back in the 1940s, there was a lot of mention of anxiety in autism but it's only been the last 10 to 12 years that we've been focusing on it," Dr Adams said.

"We need to find ways to measure anxiety but also to reduce it and stop its impact, so the children starting school now have a better opportunity to reach their full potential and gain the jobs they want to gain.

"The underlying way we're hoping to reduce anxiety is by giving parents the skills to give to their children.

"We know that if we skill parents up to do a slow and gradual approach, it is actually more effective."

The Wallingtons and their son William were last year among the first to take part in the trial.

"We had seen how much of an impact anxiety had on him in day-to-day life away from school, and knowing that in a school environment there are a lot of different pressures that are going to be put on him, we knew that we had to get some tools behind us to make this transition successful, otherwise it would make everyone's life a lot harder," Ms Wallington said.

The parents were taught skills to recognise, manage and prevent challenging behaviours, and keep William calm and focused when he started prep this year.

"The change in routine really upset him and it took a while for him to adapt," Ms Wallington said.

"But he flourishes in that school environment now and really misses it when it's the weekend … he loves his teachers and his support teachers."

Using strategies from the program, the family has also managed to gain control of another behaviour that was exhausting for everyone.

Previously, William would not fall asleep unless a parent was lying beside him.

"William is a terrible sleeper — he can go for 24-hour stints without sleeping and it has an impact on everyone in the house," Ms Wallington said.

Despite initial pushback, perseverance paid off.

"We are very lucky with William in that he gets to a point where it's all or nothing — so it was 'out of my room please — I am ready to do this all by myself'," Ms Wallington said.

"If you empower someone with information they can really actually put it into play and see their child thrive."

Griffith University is now seeking 30 families with a child with autism due to start prep in 2022.

Families will need to go to the Autism Centre of Excellence in Logan for an initial assessment, attend six parent group sessions in Brisbane or Logan and carry out weekly tasks, as well as needing to take part in follow-up assessments.

Interested families can apply by emailing the Griffith University program at Coolforschool@griffith.edu.au.